The Horn of Africa is almost equidistant from the equator and the Tropic of Cancer. It consists chiefly of mountains uplifted through the formation of the Great Rift Valley, a fissure in the Earth's crust extending from Turkey to Mozambique and marking the separation of the African and Arabian tectonic plates. Most of the region is mountainous which arose through faults resulting from the Rift Valley, with the highest peaks in the Semien Mountains of northwestern Ethiopia. 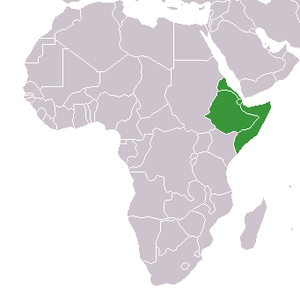 Extensive glaciers once covered the Simien and Bale Mountains but melted at the beginning of the Holocene. The mountains descend in a huge escarpment to theRed Sea and more steadily to the Indian Ocean. Socotra is a small island in the Indian Ocean off the coast of Somalia. Its size is 3,600 km² (1,390 sq mi) and it is a territory of Yemen, the southernmost country on the Arabian peninsula. The Horn of Africa. NASA image

The lowlands of the Horn are generally arid in spite of their proximity to the equator. This is because the winds of the tropical monsoons that give seasonal rains to theSahel and the Sudan blow from the west. Consequently, they lose their moisture upon reaching Djibouti and Somalia, with the result that most of the Horn receives little rainfall during the monsoon season. On the windward side in the west and center of Ethiopia and the extreme south of Eritrea, monsoonal rainfall is heavy. 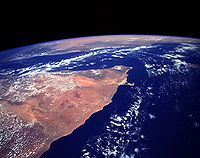 In the mountains of Ethiopia, many areas receive over 2,000 mm (80 in) per year, and even Asmara receives an average of 570 mm (23 in). This rainfall is the sole source of water for many areas outside Ethiopia, most famously Egypt, which — in terms of rainfall — is the driest nation on Earth.

In the winter, the northeasterly trade winds do not provide any moisture except in mountainous areas of northern Somalia, where rainfall in late autumn can produce annual totals as high as 500 mm (20 in). On the eastern coast, a strong upwelling and the fact that the winds blow parallel to the coast means annual rainfall can be as low as 50 mm (2 in).