Many mosques have elaborate domes, minarets, and prayer halls, in varying styles of architecture. Mosques originated on the Arabian Peninsula, but are now found in all inhabited continents. 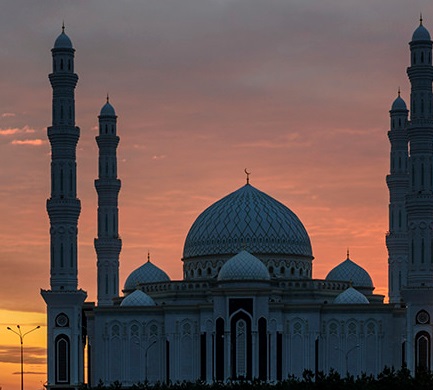 The Islamic Prophet Muhammad went on to establish another mosque in Medina, which is now known as the Masjid an-Nabawi, or the Prophet's Mosque. Built on the site of his home, Muhammad participated in the construction of the mosque himself and helped pioneer the concept of the mosque as the focal point of the Islamic city. The Masjid al-Nabawi introduced some of the features still common in today's mosques, including the niche at the front of the prayer space known as the mihrab and the tiered pulpit called the minbar. The Masjid al-Nabawi was also constructed with a large courtyard, a motif common among mosques built since then.
A similar integration of foreign and local influences could be seen on the Indonesian islands of Sumatra and Java, where mosques, including the Demak Great Mosque, were first established in the 15th century. Early Javanese mosques took design cues from Hindu, Buddhist, and Chinese architectural influences, with tall timber, multi-level roofs similar to the pagodas of Balinese Hindu temples; the ubiquitous Islamic dome did not appear in Indonesia until the 19th century. In turn, the Javanese style influenced the styles of mosques in Indonesia's Austronesian neighborsвЂ”Malaysia, Brunei, and the Philippines.
Mosques from the Ottoman period are still scattered across Eastern Europe, but the most rapid growth in the number of mosques in Europe has occurred within the past century as more Muslims have migrated to the continent. Many major European cities are home to mosques, like the Grand Mosque of Paris, that incorporate domes, minarets, and other features often found with mosques in Muslim-majority countries. The first mosque in North America was founded by Albanian Americans in 1915, but the continent's oldest surviving mosque, the Mother Mosque of America, only dates back to the 1930s. As in Europe, the number of American mosques has rapidly increased in recent decades as Muslim immigrants, particularly from South Asia, have come in the United States. Greater than forty percent of mosques in the United States were constructed after 2000.
In the United States in particular, it has been shown in a study done by the Institute for Social Policy and Understanding that Muslim Americans who regularly attend mosques are more likely to work with their neighbors to solve community problems (49 vs. 30 percent), be registered to vote (74 vs. 49 percent), and plan to vote (92 vs. 81 percent). Overall, РЈthere is no correlation between Muslim attitudes toward violence and their frequency of mosque attendance.