A courtyard or court is a circumscribed area, often surrounded by a building or complex, that is open to the sky. Such spaces in inns and public buildings were often the primary meeting places for some purposes, leading to the other meanings of court. Both of the words court and yard derive from the same root, meaning an enclosed space. See yard and garden for the relation of this set of words.
Before courtyards, open fires were kept burning in a central place within a home, with only a small hole in the ceiling overhead to allow smoke to escape. Over time, these small openings were enlarged and eventually led to the development of the centralized open courtyard we know today. Courtyard homes have been designed and built throughout the world with many variations. 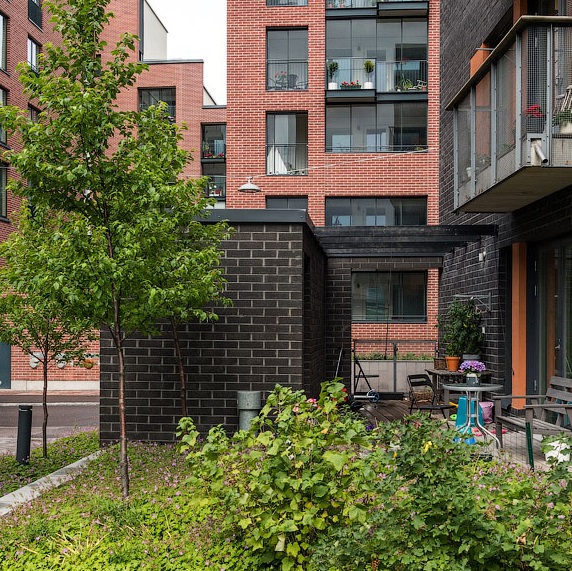 Courtyard houses in the Middle East reflect the nomadic influences of the region. Instead of officially designating rooms for cooking, sleeping, etc., these activities were relocated throughout the year as appropriate to accommodate the changes in temperature and the position of the sun. Often the flat rooftops of these structures were used for sleeping in warm weather. In some Islamic cultures, private courtyards provided the only outdoor space for women to relax unobserved.
The medieval European farmhouse embodies what we think of today as one of the most archetypal examples of a courtyard houseТ‘four buildings arranged around a square courtyard with a steep roof covered by thatch. The central courtyard was used for working, gathering, and sometimes keeping small livestock. An elevated walkway frequently ran around two or three sides of the courtyards in the houses. Such structures afforded protection, and could even be made defensible.
More and more, architects are investigating ways that courtyards can play a role in the development of today's homes and cities. In densely populated areas, a courtyard in a home can provide privacy for a family, a break from the frantic pace of everyday life, and a safe place for children to play. With space at a premium, architects are experimenting with courtyards as a way to provide outdoor space for small communities of people at a time. A courtyard surrounded by 12 houses, for example, would provide a shared park-like space for those families, who could take pride in ownership of the space. Though this might sound like a modern-day solution to an inner city problem, the grouping of houses around a shared courtyard was common practice among the Incas as far back as the 13th century.