Some of the oldest skeletal evidence for anatomically modern humans has been found in Ethiopia. It is widely considered as the region from which modern humans first set out for the Middle East and places beyond. According to linguists, the first Afroasiatic-speaking populations settled in the Horn region during the ensuing Neolithic era. Tracing its roots to the 2nd millennium BC, Ethiopia's governmental system was a monarchy for most of its history. Oral literature tells that the monarchy was founded by the Solomonic dynasty of the Queen of Sheba, under its first king, Menelik I. In the first centuries AD, the Kingdom of Aksum maintained a unified civilization in the region, followed by the Ethiopian Empire circa 1137. During the late 19th-century Scramble for Africa, Ethiopia was one of two nations to retain its sovereignty from long-term colonialism by a European colonial power. Many newly-independent nations on the continent subsequently adopted its flag colours. The country was occupied by Italy in 1936 and became Italian Ethiopia (part of the Italian East Africa) until 1947. Ethiopia was also the first independent member from Africa of the 20th-century League of Nations and the United Nations. In 1974, the Ethiopian monarchy under Haile Selassie was overthrown by the Derg, a communist military government backed by the Soviet Union. In 1987, the Derg established the People's Democratic Republic of Ethiopia, but it was overthrown in 1991 by the Ethiopian People's Revolutionary Democratic Front, which has been the ruling political coalition since. 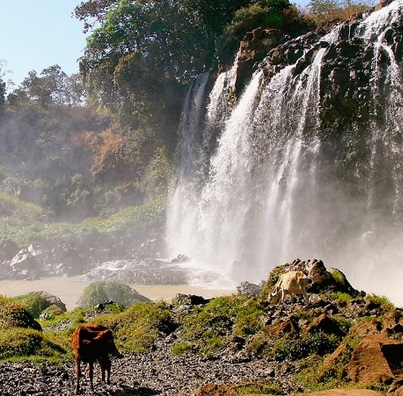 Ethiopia is also considered one of the earliest sites of the emergence of anatomically modern humans, Homo sapiens. The oldest of these local fossil finds, the Omo remains, were excavated in the southwestern Omo Kibish area and have been dated to the Middle Paleolithic, around 200,000 years ago. Additionally, skeletons of Homo sapiens idaltu were found at a site in the Middle Awash valley. Dated to approximately 160,000 years ago, they may represent an extinct subspecies of Homo sapiens, or the immediate ancestors of anatomically modern humans. Homo sapiens fossils excavated at the Jebel Irhoud site in Morocco have since been dated to an earlier period, about 300,000 years ago.
Around 316 AD, Frumentius and his brother Edesius from Tyre accompanied their uncle on a voyage to Ethiopia. When the vessel stopped at a Red Sea port, the natives killed all the travelers except the two brothers, who were taken to the court as slaves. They were given positions of trust by the monarch, and they converted members of the royal court to Christianity. Frumentius became the first bishop of Aksum. A coin dated to 324 shows that Ethiopia was the second country to officially adopt Christianity (after Armenia did so in 301), although the religion may have been at first confined to court circles; it was the first major power to do so.
Since 1996, Ethiopia has been divided into nine ethnically-based and politically autonomous regional states (kililoch, singular kilil?) and two chartered cities (astedader akababiwoch, singular astedader akababi), the latter being Addis Ababa and Dire Dawa. The kililoch are subdivided into sixty-eight zones, and then further into 550 woredas and several special woredas.