Eritrea is a multi-ethnic country, with nine recognized ethnic groups in its population of around 5 million. Most residents speak languages from the Afroasiatic family, either of the Ethiopian Semitic languages or Cushitic branches. Among these communities, the Tigrinyas make up about 55% of the population, with the Tigre people constituting around 30% of inhabitants. In addition, there are a number of Nilo-Saharan-speaking Nilotic ethnic minorities. Most people in the territory adhere to Christianity or Islam.
Eritrea is a one-party state in which national legislative elections have never been held since independence. According to Human Rights Watch, the Eritrean government's human rights record is among the worst in the world. The Eritrean government has dismissed these allegations as politically motivated. The compulsory military service requires long, indefinite conscription periods, which some Eritreans leave the country to avoid. Because all local media is state-owned, Eritrea was also ranked as having the second-least press freedom in the global Press Freedom Index, behind only North Korea. 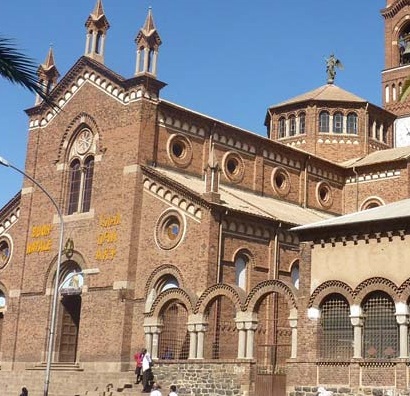 During the last interglacial period, the Red Sea coast of Eritrea was occupied by early anatomically modern humans. It is believed that the area was on the route out of Africa that some scholars suggest was used by early humans to colonize the rest of the Old World. In 1999, the Eritrean Research Project Team composed of Eritrean, Canadian, American, Dutch and French scientists discovered a Paleolithic site with stone and obsidian tools dated to over 125,000 years old near the Bay of Zula south of Massawa, along the Red Sea littoral. The tools are believed to have been used by early humans to harvest marine resources such as clams and oysters.
The Scottish traveler James Bruce reported in 1770 that Medri Bahri was a distinct political entity from Abyssinia, noting that the two territories were frequently in conflict. The Bahre-Nagassi ("Kings of the Sea") alternately fought with or against the Abyssinians and the neighbouring Muslim Adal Sultanate depending on the geopolitical circumstances. Medri Bahri was thus part of the Christian resistance against Imam Ahmad ibn Ibrahim al-Ghazi of Adal's forces, but later joined the Adalite states and the Ottoman Empire front against Abyssinia in 1572. That 16th century also marked the arrival of the Ottomans, who began making inroads in the Red Sea area.
Agriculture is the main economic activity in Eritrea: it is a livelihood to the majority of the people who engage in crop production and livestock herding. It employs more than 70% of the work force. Most farmers depend on rainfall that is variable and unevenly distributed from year to year, and the primary goal is to improve farming practices by introducing modern technology, irrigation, terracing, soil and water conservation, with less dependence on rainwater. Eritrea is divided into three development regions: central highlands, eastern lowlands, and the western lowlands. In each of these development regions, various projects are underway.